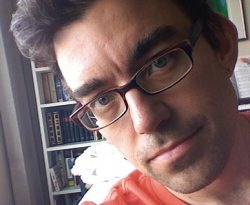 Derek K. Miller
June 30, 1969 - May 03, 2011
A tribute to Derek K. Miller featuring an interview I did with Derek early in 2007 and some of the Penmachine Session tunes. Derek very courageously documented his struggle with cancer, from Please Excuse the Salty Language (just days after the interview included here) through The last post which was published following his death.
Taxonomy upgrade extras:

I only "met" Derek Miller

I only "met" Derek Miller once - sort of - when I was looking for some music to fill the background of a video I was producing. As I wandered around penmachine.com looking for the right piece of music, I found myself transfixed by his blogs. It turned into a six-hour odyssey, at the end of which I had serious eyestrain and a newfound respect for a complete stranger.

I returned to the site frequently afterward, until a couple days ago I read the last entry on his blog page. It was truly heartbreaking, but inspiring at the same time.

I wanted to convey to his family my condolences, but the email at penmachine appears to be shut down; so, I'll just chuck this out there into the void, and hope the message gets where it ought to go.

It is open to debate whether there is any such thing as death with dignity. All of it I ever saw was (in some measure) squalid, awful and dehumanizing. Arriving at the end of life with courage and clarity in spite of that is quite another matter, and Derek Miller nailed it.

It is a rare and strange gift when someone can touch the lives of strangers through an impersonal medium such as the Internet. He nailed that, too.

That I got to know him, just a little bit, in the last six months of his life has made me see the world in a different way. A better way.

A good guy, a good writer, a good musician and from everything I've seen, a good friend and a good man.

It was an honor to know him - just a little bit.

Do you have your EdTechTalk stuff yet? Did you know there are T-shirts, hats, coffee mugs, buttons, magnets, and tote bags available? They're all based on Wordle interpretations of the EdTechTalk Delicious tags.

What are you waiting for? These are limited edition items. Shop now and avoid the rush!